So, Ravichandran Ashwin set the cat among the pigeons by Mankading Jos Buttler in an IPL match. Immediately, the spirit of the game was invoked (which the MCC officially shot down very quickly indicating there was no merit to that argument).

The ICC amended the rule concerning Mankading to clearly indicate that the batsman has to wait until the ball leaves the bowler's arm before venturing outside the crease. Ashwin was perfectly justified in doing what he did, legally as well as morally.

If a bowler bowls a no-ball, the umpire does not say, "Okay, that was your first offense so I'm letting you off with a warning." Then why should the batsman be accorded the favor of a first warning prior to being Mankaded?

If I were Ashwin, I would release the following statement before the next match:
From here on, EVERY opposition batsman is put on notice and warned. If you leave the crease before the ball is bowled, ANY bowler in my team WILL run you out. You have been warned so do not break the law by leaving the crease and we won't have to break the spirit of the law to fix your action.

Posted by Jaunty Quicksand at 4:59 PM No comments:

One of the advantages of teaching at a small liberal arts institution is the freedom to design and offer courses that are close to one's heart.

In January 2016, I taught Tanzania: Culture, Climate, and Connections and took students to Africa.

The Dandenong Mountain Range is named after an Aboriginal word called, tanjenong, which translates to ‘lofty’. This word has no real origin other than the fact that it was named after the nearby Dandenong creek.

This range is found in Southern Victoria, which is just East of Melbourne in the Highlands. These are low mountain ranges that have several peaks exceeding 1,600 feet. Mount Dandenong is 2,077 feet high and is the highest peak in these ranges.


This mountain range is very fertile due to the coastal rains and volcanic soils, leaving the vegetation dense in its coverings. This gets twice as much rainfall as the coastal plains receive.

The ranges are mostly comprised of rolling hills, steeply weathered valleys, and gullies (a channels cut into the soil, in hillside formed by running water). The type of vegetation here is a thick temperate rainforest, which contains tall Mountain Ash trees along with dense fern-like undergrowth.

Starting in 1882 lots of the parklands were protected, but intensive expansion created the Dandenong National Park in 1987. In 1997 the ranges were further expanded. These ranges receive moderate snowfall a few times a year, within the months of later winter into late spring. . The drier ridges are where the Eucalyptus regnans (Mountain Ash Forest) are exposed on the northern slopes and are covered by dry sclerophyll forest and stringy barks and box. This range experiences bush fires quite often as they are in the drier portion of the forest. There are 10 plus creeks trialing through these ranges along with two major water falls (Olinda Falls and Sherbrooke falls) along with quite a few summits. The climate is mild and wet with temperatures as low as 1 degree in the winter. Precipitation is common all year round, but peaks between April and October. Heavy fog is common within these ranges.

Currently, the Dandenong Ranges occupy nearly 100,000 residents and allows lots of attractions with its National Parks.

After reaching the Forest, all of us went for a walk on one of the many trails leading away from the Visitor Center.

After the walk, we had some English tea and scones before embarking on a learning tour of the forest along another, longer trail. Along the way, Manish talked about the history, geography, and ecological features of the forest.

The mountain range is the remains of an extinct volcano that was active nearly 373 million years ago. The composition of it is mostly Devonian dacite and rhyodacite. The topography of this consists of lot of ridges dissected by deep cut streams. As mentioned already, lot of gullies are found in the southern portion of the range. These gullies are full of lots of fern. The drier ridges are where the Eucalyptus regnans (Mountain Ash Forest) are exposed on the northern slopes and are covered by dry sclerophyll forest and stringy barks and box. This range experiences bush fires quite often as they are in the drier portion of the forest. There are 10 plus creeks trialing through these ranges along with two major water falls (Olinda Falls and Sherbrooke falls) along with quite a few summits.

We stopped briefly for the traditional "squad" picture.


At the Visitor Center, for a token price, guests are allowed to feed wild cockatoos that live in the mountains.

After a sumptuous meal, cooked on the barbeque pits provided by the facility (a feature we learned was common to most of the sites we visited) we headed back to Melboune. Some of the students went back to the ocean for another dip after which we packed our suitcases, placed them in storage, and got ready for the next adventure on our list - the drive into Australia's famed Outback.

One of the advantages of teaching at a small liberal arts institution is the freedom to design and offer courses that are close to one's heart.

In January 2016, I taught Tanzania: Culture, Climate, and Connections and took students to Africa.

The excitement of traveling abroad vastly compensated for the really long time (and changes of flights) it takes to get to Melbourne from Omaha. Luckily, all the details of the trip were very well taken care of by an Australia-based adventure travel company, Ozi Expeditions.

We left Omaha in the afternoon of Day 1. A brief layover in Denver was followed by a flight to Los Angeles, where we completed all our international travel check-ups and boarded the looooooong flight to Melbourne around 10:30pm. By the time we landed in Melbourne it was 7:30am on Day 3, thanks to our crossing the International Date Line. "Day 2" was therefore spent somewhere over the Pacific on a plane and did not exist in our timelines.

Clearing Immigration in Melbourne was not much of a hassle and a relieved group assembled for the first (of many, many) group pictures.


We were received by the Ozi Expedition guides - Damian, Peter, Eddie, and Barry (and the other Peter, in absentia), who also doubled up as our drivers for the trip. Since we were going to be traveling deep into the heart of the Australian Outback, we were also accompanied by a nurse (Jodi) for any emergencies, medical or otherwise.

After collecting our bags, we got into 5 vehicles and went to a youth hostel. After freshening up, we went right back to downtown Melbourne as we had an entire day ahead of us.

We began a tradition that would last for the duration of the trip . The first photograph of each day was a group photo of our shoes 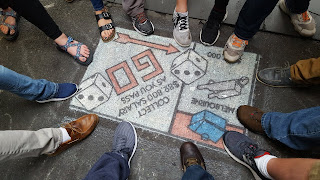 For each day of the trip, a student was assigned the task of doing background research and informing the group about the sights we saw and the places we visited. The city of Melbourne was research by Derrick Kruetzfeldt. Here are some excerpts from his findings:

Settled by the British in the late 1830s, Melbourne has a population of over 4.7 million making it the second most populous city in Australia. Located on the southern most part of Australia, Melbourne is in the state of  Victoria and is a very popular tourist destination.
Melbourne is a very walking-friendly city and usage of public transportation is encouraged by the government by not charging patrons using the trams in the Central Business District. This significantly reduces traffic since visitors can simply park on the edge of the city and then ride the extensive network of trams for free to get across town for no additional cost.

A hidden jewel of Melbourne is the street art (graffiti) that is encouraged and supported in certain locations. One such location is opposite Federation Square, joining Flinders Lane and Flinders Street - it is a cobblestoned street closed to traffic called Hosier Lane. Almost any surface is covered with creative graffiti honoring many known and unknown artists and ideas.

Melbourne is known for three very popular sports played in iconic sporting arenas. The Australian Football League and Cricket are played at the historic Melbourne Cricket Ground (commonly referred to by the locals as the G), which can seat more than 100,000 fans. 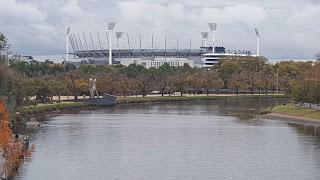 Melbourne is located on the Southern Ocean but not many people swim in it, especially during the winter months when it can get very cold. The Melbourne’s beach/coastline stretches out for more than over 2000 kilometers and has diverse creatures such as jellyfish, bull sharks, great white sharks, and even octopuses in it.

Swimming in the ocean in the winter is not for the faint of heart but Logan Paasch was definitely not going to be denied. Having never seen the ocean in his life, Logan was determined to take a dip it it no matter what.

After dinner at the hostel, Damian took us on a leisurely walk to St. Kilda beach (a couple of blocks from the hostel), where he sprung a surprise on us - a visit with penguins! The St Kilda breakwater at the end of the St Kilda Pier is home to a colony of Little Penguins. At the end of each day, just around dusk, come penguins swim back to the breakwater, climb out of the water and waddle over the breakwater rocks to their nests among the rocks.

This was an eminently satisfactory way to end our first day in Melbourne.

Next up: Day 4 - The Dandenong Mountains and a walk through an old growth forest


Posted by Jaunty Quicksand at 3:19 PM No comments: